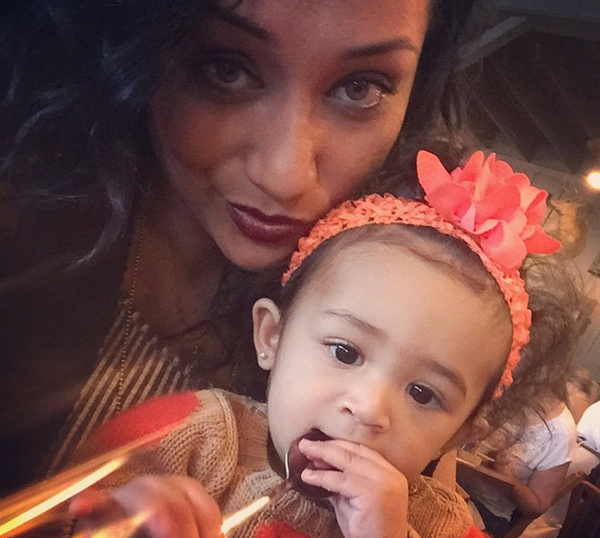 Last week Chris Brown publicly slammed his baby mama Nia Guzman for posting a photo of their daughter Royalty on IG which he thought was inappropriate. Speaking in her first interview since the online battle, Nia opened up about issues she’s having with Chris Brown and more

From Latina Magazine
It’s tough to co-parent in any situation, but it’s got to be a billion times harder your child’s father is someone in the public eye. What has it been like for you over the past two years co-parenting with someone like Chris Brown?
Well, the world didn’t find out about her until a year ago. He always knew about her, he just wasn’t ready to deal with the situation. But, it’s been quite the experience. I can’t say anything positive about it… at all. Nothing positive.

Like you said, we didn’t know about Royalty until she was a year old. Why did you choose to keep that news private?
It was just on both parts. I knew what the outcome was going to be once it came out. I was very fearful for.. everything that’s going on now. I know that he’s young, he’s wild, and he has the bad boy persona, and I just knew that it just wasn’t going to be the best situation. And if I could have still kept it quiet until now, I would have.

Royalty’s very young. How do you shield her from all of this now, and what are your plans in the future as she grows older?
I want to keep her as normal as possible on my end. I’m not a millionaire like daddy, so of course it is going to be regular on my side. It’s just going to take a lot of talking and just getting her to know right from right and wrong from wrong, and not be some spoiled little rich kid out here just thinking that the world is hers and she can do whatever she wants. I don’t want her to self-destruct. I want her to be raised normal.

This week, there was a lot of talk about the photo of Royalty in her ballet outfit . Did you think that was going to be as huge as it was, and why did you think it was important to respond to Chris?
I mean the fact that I had just spoken with him. He had already seen a video of her on her way to ballet class. To make that remark online, was totally insane to me. Because I have a phone. I have a phone, and I tried over and over and over to co-parent, to try and get this right. It went global! The picture’s everywhere! I personally saw nothing wrong with it. She always dresses like that to dance class. It was a cute picture, she had just finished dance, she was pouting. It was a funny moment, and she was leaned back looking at me because she was totally pissed off, because it was time to go. She was done with the class, but she didn’t want to leave. She just wanted to sit there. So, that’s the moment that I captured and it was funny to me! I don’t sexualize a toddler, or think of my children in any way like that. So for the backlash of that.. I didn’t understand it.

Did you speak with Chris after that comment?
No. After that comment, I don’t think there’s going to be anything good in talking, so we just don’t. When it’s that far, it’s just rather nobody talks because me and him are both firecrackers, and then nobody gets anything accomplished but yelling. And it’s just a place that I don’t want to be.

In addition to the photo going viral, there was news about the court battle about limiting the amount of days Chris is allowed to see Royalty. Does that mean you’re worried about her safety when she’s with him?
No. That’s the false story. I didn’t go back to court to limit his time, at all. That’s never what I wanted. What’s in place right now, his days that he gets her, was agreed upon. I agreed to that. That’s what I wanted for him. It wasn’t court ordered or anything like that, all the way from the first agreement. It was agreed. And so this time around, all I wanted was a set nanny in place, that’s all I was wanting. I never wanted to limit his time or take any of his time from him. I totally want him to be hands on with her, and be a father, and try and get it more focused, and leave all the other bullsh-t that he has going on, alone.

Do you feel like he’s too young and irresponsible to watch her alone?
It’s pretty common sense. He knows. He knows he cannot do it on his own. She’s only two, and she’s a lot of work. I just wanted a nanny in place when she was with him, and it be agreed upon. It’s not like I was just going to throw anybody in there, it was something that we would agree, and this was what it was going to be, and then we go forth.

So what was his issue with that? That sounds completely logical.
I don’t really know what the issue is with that. I could throw around all kinds of speculations, I could totally bash the situation. I’m not going to do that. I won’t do that. Everything that’s put out there, I don’t even have to explain it.
People have so many misconceptions about you, and they just throw you into this stereotype. What’s the most untrue thing you’ve ever heard about yourself?
Gold-digging. I think this whole money issue too has been out of control. This number that people are stuck on, this $15K, this $16K.. that is something that is legally calculated, from dad’s income. So, it’s not even a set number. I just want to have Royalty in a safer home. I would want it to be not leave to dad, and not be in a mansion, and huge playrooms and backyards and TV rooms, and then she comes home with me and you know, she’s in a small apartment. I just want to keep her balanced. He feels like she should have everything when she’s with him, and limited when she’s with me. And I don’t think that is ok, at all.