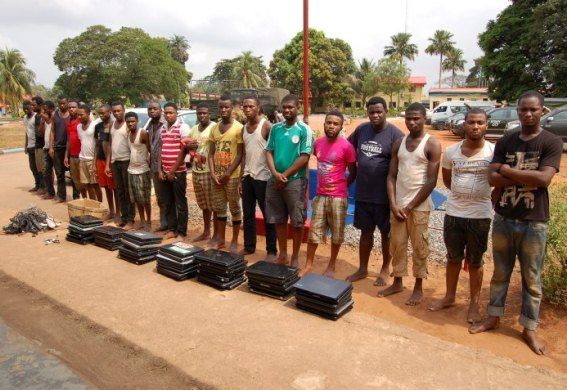 The Economic and Financial Crimes Commission, EFCC, has arrested twenty suspected internet fraudsters. The arrest which was carried out in a joint operation with officers of the 4 Brigade of the Nigerian Army, Benin, followed intelligence report on their activities. They were nabbed in a surprise raid on their Cyber office tucked in an old building located on Siluko Road, Benin City.

At the point of arrest, the fraudsters had in their possession forty five (45) laptops of different make, twenty eight (28) telephone sets, eight (cool internet mobile modems and one Nissan car with registration number USL 375 AG.

The suspects have made useful statements. Most of them confessed to be engaged in online dating of foreigners particularly widows. They also confessed to using different pseudo names and faces to deceive their prospective victims. They will be charged to court as soon as investigation is concluded.