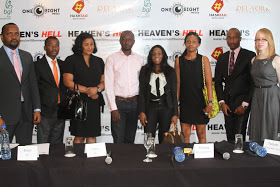 The Nigerian film industry, Nollywood, has recorded another milestone. Beyond just world class films being churned out, and more acceptances from a growing international audience, organizations are partnering to bring greater development to the industry.
�
Recently, a group of local and international organizations, namely: One-O-Eight Media, BGL Asset Management, Del-York International, Hashtag Media House, and Aberystwyth University, entered into such partnership.
�
During a press conference unveiling their long-term relationship, journalists were given a hint into their first project as partners. A working title, �Heaven�s Hell�, is to be released internationally in early third quarter of 2013.
�
The theme of this movie centres on the support of the fight against Violence on Women and Children and is set to shoot in Nigeria and in the UK, making use of the best cast, crew and equipment.
�
About the Partners:
�
One-O-Eight Media�is a leading provider of film, documentary, TV news and entertainment content across broadcast television, digital media and mobile platforms. With a focus on Africa, the company says they tend to drive profitable growth locally and internationally �by engaging with communities, on their own terms, across multiple platforms and by developing effective marketing opportunities that connect film makers, marketers, distributors and advertisers to the prospective customers they want to reach.� One-O-Eight Media is the lead production partner on the Heaven�s Hell Movie Project.
�
BGL Asset Management Limited, a subsidiary of BGL Plc, is known as having a reputation for helping clients achieve their financial goals and optimize risk adjusted returns on their investments. Beyond investing in mature sectors, BGL now wants to support youth development, job creation and diversification of the Nigerian economy through non-oil sector growth including the development of the Creative Industry. With a commencement capital base of N4 billion, assets under management in excess of N85 billion, BGL looks poised to become the preferred provider of asset management services in Nigeria.
�
Hashtag Media House�is a leading media company offering professional creative, film and media solutions, working across a range of fields including media and communication services, film production and distribution and home and family entertainment. The company also acquire, develop and produce film properties based on screenplay and books; creating stories and bringing them to life. As co-production partners on the Heaven�s Hell Movie Project, the company says that they �will deliver this outstanding story � Heaven�s Hell � in the most impactful way possible.�
�
Del-York International Limited, a full service media and broadcast communications company, delivers professional media services, content production, media capacity development, international media distribution and technology solutions for media and education. In partnership with the New-York Film Academy, they have trained over 650 creative minds in film-making and broadcast journalism. As a partner on the Heaven�s Hell Movie Project, Del-York seeks to produce outstanding promotion and PR, promotional considerations and profitable international distribution for the movie.
�
Aberystwyth University (Wales, UK)�As an institution of over 140 years and home to a prestigious television, film and theatre studies department as well as a BBC Cymru Studio, the prestigious university, according to its . International Development Manager for Africa � Mr Murtza Ali Ghaznavi said, �we are looking forward to further developing our links in Nigeria and are particularly aware of its vibrancy as a film market. We wish nothing but the best to the dedicated Nigerian film-makers.�