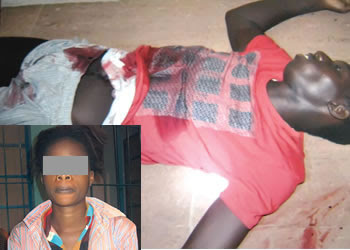 May 5, 2013 was Onyinyechi Orakwuelum’s 18th birthday.The day she became an adult and the day she allegedly stabbed to death 19-years-old Akinwale Ayobami, who she said wanted to rape her.

Onyinye, who is currently being held at the State Criminal Investigation Department (SCID), Iyaganku, Ibadan, pending investigation, narrated her story to Tribune and she said:

I am from Nkwele Ogidi in Anambra. I finished from Saint Gabriel Commercial Secondary School, Mokola, Ibadan, in 2011.

The deceased (Ayobami) was my mate in secondary school, as well as my friend Funmbi.

My parents moved to our personal house at Ologuneru community in Ibadan, so I lost contact with my friends. One day, my mother came home and told me that she saw my friend, Funmbi, and that they had also moved to Ologuneru. I was happy and we reunited.

She later gained admission into a university. In April this year, she came to me and asked if I remembered Ayobami, who was popularly called Ewizzy. She said they chatted on facebook and that he told her that he was also living at Ologuneru, and had asked her to meet him at a junction so that she could know his place.
I told her that I could not recollect the name so she went alone.

The next time she wanted to go there, she asked me to follow her. I initially refused, but she persuaded me. We got there and saw him. His girlfriend was also there, lying on a couch. We relived our secondary school days and he later requested for my number since we were living in the same area. I gave him.

We left and not too long after, he called me, saying that he had been calling Funmbi’s number but it was switched off. He said he wanted to know if I had got home. Funmbi was beside me then so she also answered because her phone battery had gone flat by then.

Since then, I did not hear from him, though there was a day I missed his call, but I could not call him back as I had no credit on my phone.

On my birthday on May 5, I went to help a lady in our neighbourhood after coming back from church. When I checked my phone later, I saw Ayobami’s call among others that I had missed.

I called him back and while chatting, I told him that day was my birthday. He congratulated me and said it was worth celebrating. I told him I was only marking it.

He asked where I was and I said Ologuneru, he then asked me to join him at Ologuneru junction. I went there at about 7p.m. and I saw him come out of a beer parlour. I didn’t know that he was already drunk.
On getting to his apartment, he took me through the back door. When I asked why, he said the lock on the front door was bad so he locked it with a padlock.

I told him I preferred to sit outside because it was pitch dark inside. He opened the front door and I went in. We put on torchlights.

We started discussing about school days again and he then went to the kitchen and offered me water. I told him I was o.k. and he went into the kitchen again.

It was at that point that Onyinyechi said the story changed. She narrated further:

�He came back and locked the front door with a padlock. I asked him why he did that but he just sat beside me and said he wanted to date me. I even thought he was joking, and I replied that ‘is that what we came here to do?’ but he told me he was very serious.

As he moved closer, I perceived a strong smell of alcohol, then I knew he was drunk.

I told him to open the door for me to leave but he said I was not going anywhere. I started pleading but he did not yield.

�The next thing he did was to pull off his trousers and I knew I was in trouble because I could see he was aroused. He told me I could see that he was in mood for sex and that he must have his way.

I opened the sliding window screaming ‘somebody, please help me!, Somebody, please, save me!’. He came there, slapped me, drew me back and locked the window.

I started running round the sitting room and he was pursuing me.

�He went to the kitchen and brought a knife, warning me not to waste his time.
He threatened to do something nasty to me if I did not yield to him after counting from one to 10.

He had said before that he loved his mother so I begged him in the name of his mother, he did not yield ground.

I begged him in the name of God but he said he left God a long time ago and that he was serving Ogun. He showed me the picture of a bird hanged on the wall and said that was the symbol of his god.

I also told him I was having my menses but he said I should allow him to do what he wanted to do, saying that if his friends should meet me in the house, they would take their turns with me.

He lit a cigarette and started smoking. He started his countdown but I knelt and was pleading. As he got to eight, I screamed the more but he rushed at me and started struggling with me to remove the bum shorts I was wearing underneath my long dress.

In the process, he dropped the knife, and at that moment of intense fear, I picked the knife and waved it at him in the darkness. The next thing I heard was Yee! O ti gun mi (Oh! You have stabbed me).

I stood up, shivering. I searched for my phone because the entire place was in topsy-turvy.

Throughout the struggling, no one responded among his neighbours, though he had earlier said that no one would respond to me as they regard the occupants of his flat as ‘Dons’ who are dreaded.

�I reported at home and we went to the police station to report. By the time we got back to the house, he was dead. It was in the morning that it was seen clearly that the knife pierced his heart.”

Sunday Tribune gathered that the deceased’s mother had been so distraught about his death that she had been calling for justice to be done to her son’s killer.

She was said to be separated from the boy’s father and had remarried and given birth to other children while Ayobami was the only child she had for the father.

Police investigations also revealed that the man Ayobami was living with in the flat was not related to him.

Reacting to the story, the Assistant Commissioner of police in charge of the Criminal Investigation Department, Iyaganku, ACP Dasuki Galadanchi said the matter was still being investigated.

There is no witness yet to support the suspect’s story. On the side too, dead bodies cannot talk. There was no witness on the side to corroborate whether there was an attempted rape or not.

In line with the police strategy of the Inspector General of police which encourages openness, transparency and accountability, we will go deeper into investigations and get to the root of the matter. If she’s found culpable, she’ll be charged to court accordingly. We are for justice.