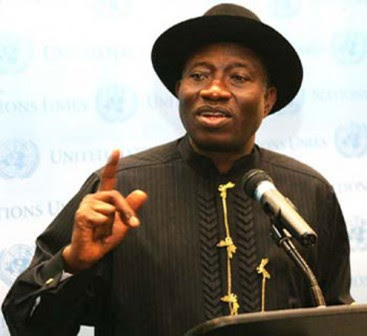 1.��� It has become necessary for me to address you on the recent spate of terrorist activities and protracted security challenges in some parts of the country, particularly in Borno, Yobe, Adamawa, Gombe, Bauchi, Kano, Plateau and most recently Bayelsa, Taraba, Benue and Nasarawa states.� These unfortunate events have led to needless loss of lives and property of many innocent Nigerians including members of our security forces.

2.�� The recent killing of security operatives by a cult group in Nasarawa state is particularly condemnable. I have directed that no effort or expense be spared in identifying and bringing to justice all those who had a hand in the killing of the operatives.

3.�� The activities of insurgents and terrorists have been reprehensible, causing fear among our citizens and a near-breakdown of law and order in parts of the country, especially the North. We have taken robust steps to unravel and address the root causes of these crises, but it would appear that there is a systematic effort by insurgents and terrorists to destabilize the Nigerian state and test our collective resolve.

4.� Since I returned to the country after cutting short my visit to South Africa and aborting a planned state visit to Namibia, I have received detailed briefings from our security agencies. These briefings indicate that what we are facing is not just militancy or criminality, but a rebellion and insurgency by terrorist groups which pose a very serious threat to national unity and territorial integrity. Already, some northern parts of Borno state have been taken over by groups whose allegiance is to different flags and ideologies.

5.�� These terrorists and insurgents seem determined to establish control and authority over parts of our beloved nation and to progressively overwhelm the rest of the country. In many places, they have destroyed the Nigerian flag and other symbols of state authority and in their place, hoisted strange flags suggesting the exercise of alternative sovereignty.

6.� They have attacked government buildings and facilities. They have murdered innocent citizens and state officials. They have set houses ablaze, and taken women and children as hostages. These actions amount to a declaration of war and a deliberate attempt to undermine the authority of the Nigerian state and threaten her territorial integrity. As a responsible government, we will not tolerate this.

7.� Previously, we adopted a multi-track approach to the resolution of this problem through actions which included persuasion, dialogue and widespread consultation with the political, religious and community leaders in the affected states.

8.� We exercised restraint to allow for all efforts by both State Governors and well-meaning Nigerians to stop the repeated cases of mindless violence.

9.� Yet, the insurgents and terrorists seek to prevent government from fulfilling its constitutional obligations to the people as they pursue their fanatical agenda of mayhem, mass murder, division and separatism.

10. While the efforts at persuasion and dialogue will continue, let me reiterate that we have a sacred duty to ensure the security and well-being of all our people and protect the sovereign integrity of our country. Therefore, we shall, on no account, shy away from doing whatever becomes necessary to provide the fullest possible security for the citizens of this country in any part of the country they choose to reside.

11. We have a duty to stand firm against those who threaten the sovereign integrity of the Nigerian state. Our will is strong, because our faith lies in the indivisibility of Nigeria.

12. Following recent developments in the affected states, it has become necessary for Government to take extraordinary measures to restore normalcy. After wide consultations, and in exercise of the powers conferred on me by the provisions of Section 305, sub-section 1 of the Constitution of the Federal Republic of Nigeria 1999 as amended, I hereby declare a State of Emergency in Borno, Yobe and Adamawa states.

13. Accordingly, the Chief of Defence Staff has been directed to immediately deploy more troops to these states for more effective internal security operations. The troops and other security agencies involved in these operations have orders to take all necessary action, within the ambit of their rules of engagement, to put an end to the impunity of insurgents and terrorists.

14. This will include the authority to arrest and detain suspects, the taking of possession and control of any building or structure used for terrorist purposes, the lock-down of any area of terrorist operation, the conduct of searches, and the apprehension of persons in illegal possession of weapons.

15. The details of this Proclamation will be transmitted to the National Assembly in accordance with the provisions of the Constitution. But in the meantime, let me make it clear that within the purview of this Proclamation, the Governors and other political office holders in the affected states will continue to discharge their constitutional responsibilities.

16. I urge the political leadership in Borno, Yobe and Adamawa states to co-operate maximally with the Armed Forces and the Police to ensure that the exercise succeeds. We call on the citizenry to co-operate with our security agencies to ensure a return to normalcy within the shortest possible time.

17. I am again approaching our neighbouring countries, through diplomatic channels, as done in the recent past, for their co-operation in apprehending any terrorist elements that may escape across the border.

18. Nigerians are peace-loving people; these sad events perpetrated by those who do not wish our nation well have not changed the essential character of our people.

19. I want to reassure you all that those who are directly or indirectly encouraging any form of rebellion against the Nigerian state, and their collaborators; those insurgents and terrorists who take delight in killing our security operatives, whoever they may be, wherever they may go, we will hunt them down, we will fish them out, and we will bring them to justice. No matter what it takes, we will win this war against terror.

20. I am convinced that with your support and prayers, we shall overcome these challenges and together, we will restore every part of our country to the path of peace, growth and development.