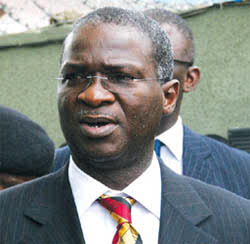 The Lagos State Government has given out 140 transformers that cost N975m to members of the State House of Assembly, ministries, agencies and parastatals to boost energy generation.

Commissioner for Rural Development, Cornelius Ojelabi, at an event to mark the handover in Badagry, said the transformers were a fulfillment of Governor Babatunde Fashola�s wish to meet the yearnings of the people.

He said the governor decided to give 132 transformers to the lawmakers for the use of the constituencies because they approached him (governor), saying the transformers were needed by their people.

The commissioner said, �We are handing the transformers over to the lawmakers so that they can ensure that the communities maintain them very well.�

Ojelabi, who lamented that a large number of the Community Development Associations had not paid their annual fees to the state, appealed to the lawmakers to ensure that their communities pay the token fees of N5, 000 as a way of showing their commitment to the development of the state.

The Speaker, Adeyemi Ikuforiji, who was represented by the Chairman, House Committee on Agriculture and Rural Development, Ibrahim Layode, commended the governor for his effort to boost power distribution.

He said lawmakers would continue to work with the executive for the prosperity of the state.