Home » NaijaVibe.Net » Woman who lost both arms and legs after taking Injection for bigger bottom 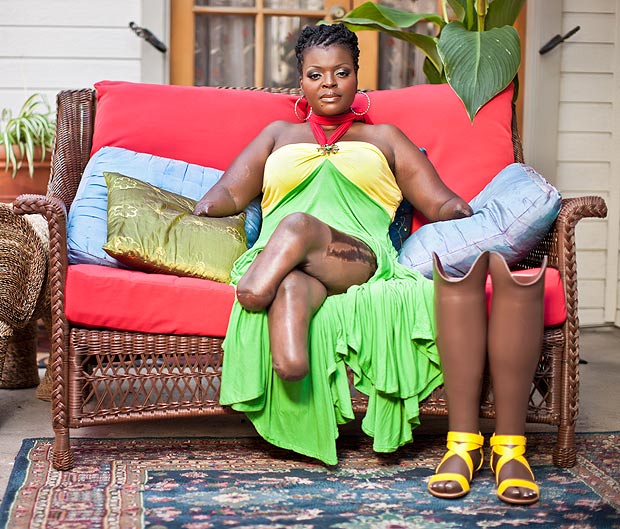 A mum of two as told her story – how her quest for a bigger bottom left her in agony and led to her losing her hands and feet, as well as her buttocks.

The 46-year-old former hairdresser Apryl Michelle Brown had black-market silicone injections which turned out to be BATHROOM SEALANT and�she�blames �vanity” and wants to warn others of the terrible dangers of such illegal treatments.

Apryl said: �I’ve paid a terrible price for vanity and I’ll pay for the rest of my life. But I blame no one but myself.

�I want to share my story to warn others about these so-called ‘quick fix’ surgeries.
�I didn’t realise the dangers. I thought it was a harmless injection that would give me the perfect bottom. But the reality was the silicone used wasn’t suitable for humans. It was, in fact, bathroom sealant only suitable for DIY.
�My body had a massive allergic reaction to it which left me at the brink of death.

�I was in so much agony that, by that point, dying would have been a release. The only way doctors could save my life was to amputate my buttocks, my hands and feet.” 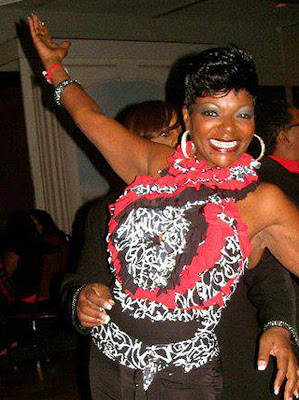 Teased as a child about her �pancake” bum, Apryl vowed to buy a shapelier one when she was older.

She said: �I didn’t know if I wanted mine to look like Janet Jackson’s or J-Lo’s.
�I didn’t even know how you could do it. I just wanted a new, bigger bottom.”

The moment that changed her life came in 2004, when two women walked into her successful beauty salon to get their hair done. 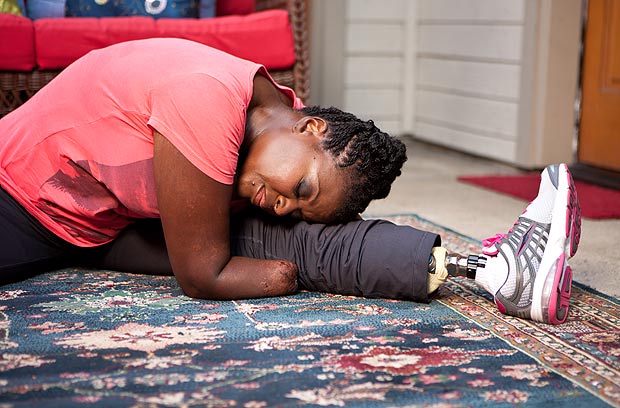 One of them ran �pumping parties” � where unqualified practitioners inject illegal silicone into �patients” at their home.Apryl, from Los Angeles, said: �One of the women told me how she had given bottom injections to the friend who was with her.

�I remember thinking it was a miracle she’d walked into my life. Her friend showed me the work she’d had done and it looked great.

�In a split second I made the decision that I was going to go to this woman and let her inject silicone into my behind.”
That decision nearly killed her. Apryl paid the woman, who had no medical background, around �650 for two lots of injections. Doctors later discovered the substance used was industrial-grade silicone.

Apryl admitted: �I didn’t do any research. A combination of naivety, misplaced trust and insecurity led me to take this disastrous decision.

�I trusted her because she seemed so professional, and I had no reason to think anything awful was going to happen.

�She carried out the procedure in her daughter’s bedroom. She assessed my bottom and said, ‘You’ll need three or four sessions to get the result you want’.

�The first procedure took an hour. I remember asking, ‘Is it meant to be so painful?’ and she said, ‘Yes’. It felt like it was squeezing through my nerves.”

Within weeks Apryl returned for her second treatment.

She said: �After going through it again I had an epiphany. As I left her house I thought, ‘What am I doing? I have no idea what she’s putting in my body’.

�I never returned. But though I didn’t know it then, my life had already changed forever.”Over the next two years the area where she’d been injected became hard and the skin blackened.

Apryl, mum to daughters Danye, 22 and Courtney, 21, said: �Within a few months of the second injection my buttocks began to harden. I knew something wasn’t right. But shame stopped me seeking medical help. As time went on it got worse as the skin blackened. I developed hard lumps. Then the searing pain started. I had to tell my doctor what I did. I was so ashamed.”

Apryl spent the next four years in constant pain. Two surgeons told her it was too dangerous to remove the silicone.

She said: �I was in so much agony I became a regular at hospital asking for medication to ease what was like a combination of a migraine, childbirth and toothache localised in one area.

In February 2011 a surgeon operated unsuccessfully. Apryl developed a hole in her buttocks � thought to be the trigger for an infection that in June was nearly fatal. She said: �I was 24 hours from dying. I didn’t think of leaving my family. It was a relief I’d finally be free of pain.”Doctors put her in an induced coma for two months while performing 27 surgeries � starting with amputating her buttocks � and doing extensive skin grafts.

She said: �They saved me but gangrene set into my hands and feet. I was brought out of sedation shortly before I became a quadruple amputee.

�My hands looked like those of a dead person. I knew then I was going to lose them.”

She added: �At first you try to register your new limbs. The real comprehension comes when you start to live this new life.

�I had dark times. I cried a sea of tears. I had to face the fact I’d lost my hands, feet and buttocks because of complications from bottom injections. I was overwhelmed by shame and guilt… all because I wanted a bigger bottom.

�I was six months in hospital. By the time I was discharged I was determined to turn this terrible thing into something positive.

�I decided to do a triathlon. I told myself if I could achieve that I could do anything.

�I took my first steps again by the end of 2011. I built up to training six days a week, learning to walk, cycle then swim again using my residual limbs.

�I’d be crying in pain but I’d push through it. And six weeks ago I did it � completing a three-mile walk, ten-mile cycle and a 150-metre swim.

�When I crossed that finishing line with my family cheering me on, I cried tears of joy.” 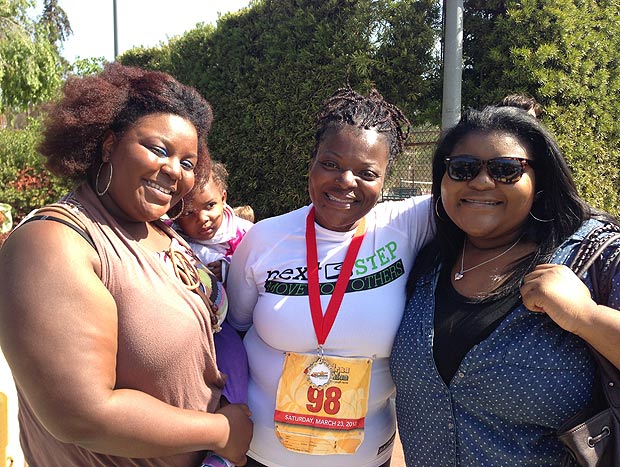 She added: �I haven’t sued or sought compensation. I just want to move on. There are things I miss dearly � I’ll never be able to do my girls’ hair or feel sand between my toes.

�But I believe I survived to share my story.

�I want to warn others of the dangers of black-market surgery. We were born whole, perfect and complete.

�My greatest message is we have to learn to love and accept ourselves for who we are.”

My Life Is Imperfect Without My Woman – Teebillz