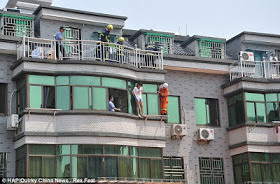 A Chinese teenager who jumped from a third-floor window in a suicide bid after learning that her boyfriend is married was saved by a giant pillow.

The 19-year-old Chinese woman threatened to launch herself from the building after discovering her partner had a wife and a ten year old child. 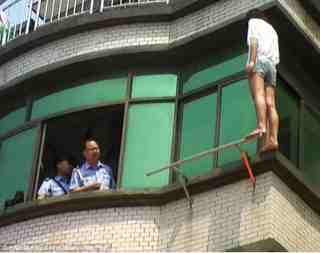 She clambered out onto a metal pole and threatened to jump.

Despite attempts to talk her down from the ledge in an apartment block in Hangzhou, capital of eastern China’s Zhejiang Province, she thew herself from the block.

But meanwhile firefighters had set up a massive air cushion below and the woman landed safely, escaping uninjured. 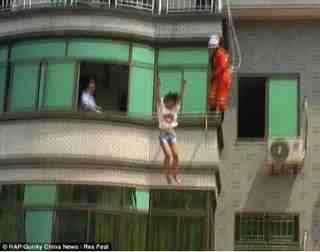 It is unclear whether the woman has intended to reach the pillow or if she had launched a genuine attempt on her life.

The air cushion measures roughly 6 metres by 7.5 metres and 2.75 metres high, and is capable of absorbing the shock of a body falling from 10 floors. From June 2005 to May 2012 an average of 17 emergency incidents a month across China required cushions, which can be inflated in a minute.