Governor David Umahi of Ebonyi state on Monday, sacked Prof Bernard Odoh as the Secretary to the State Government and appointed Dr. Hygenus Nwokwu as his replacement.

Announcing the sack in the government House, Abakaliki during a massive solidarity rally by the people of Ezza Ezekuna, the Governor said he has invalidated the resignation letter earlier submitted by the sacked SSG because the letter was written on a public holiday and therefore did not hold any valid meaning.

“In my capacity as the Governor of Ebonyi state, I hereby nullify the purported letter of resignation earlier written by Prof Odoh because he wrote the letter on a public holiday and we all know that by law, any letter of resignation done on a public holiday does not hold water. I also here and now announce his sack as the Secretary to the State Government, SSG” he said. 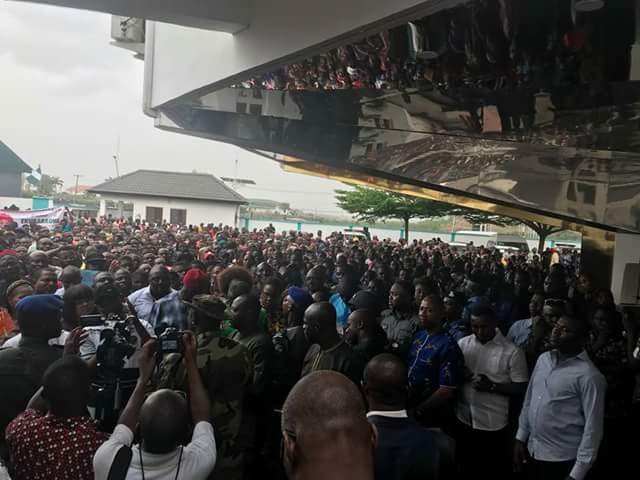 Umahi further lamented that despite the love he showed the former SSG even though he was not a member of his political party, the PDP at the time of his appointment, the young man still stabbed him at the back.

“I appointed him SSG because I felt he was a responsible Ezza man. Many people faulted his appointment because he was not a PDP member but an APGA senatorial candidate in 2015 general election. Since his appointment, I have shown him love and assisted him so many ways. I called him to my country home and told him that case of murder is a very serious one, I asked him to see me but he switched off his phone throughout the Easter period and the next thing I heard was his resignation letter flying up and down in the social media”

Governor Umahi also announced the immediate appointment of Dr. Hygenus Nwokwu as the next Secretary to the State Government and described him as a round peg in a round hole.

Dr. Nwokwu before his appointment was the Deputy Director General of Divine Mandate, a political platform in which Governor Umahi ran his campaign in 2015 general election and also hails from the same Ezza North local government area of the state with the sacked SSG.

Speaking earlier during the solidarity rally by the Ezza nation, member representing Ikwo/Ezza South federal constituency, Laz Ogbee said they were in government house to disassociate themselves and entire Ezza nation from what he described as shameful action of the former SSG.

He said his action did not reflect the character of Ezza man, adding that he took the unilateral decision to embarrass the state government without any recourse to his people, the Ezza nation in whose trust he held the position of Secretary to the State Government.

Mr. Anayo Edwin Nwonu representing Ezza North/Ishielu federal constituency described the action of the former SSG as embarrassment to the image of Ezza nation and called on the governor to disregard the action as the entire Ezza nation will give him massive support in 2019 governorship election.