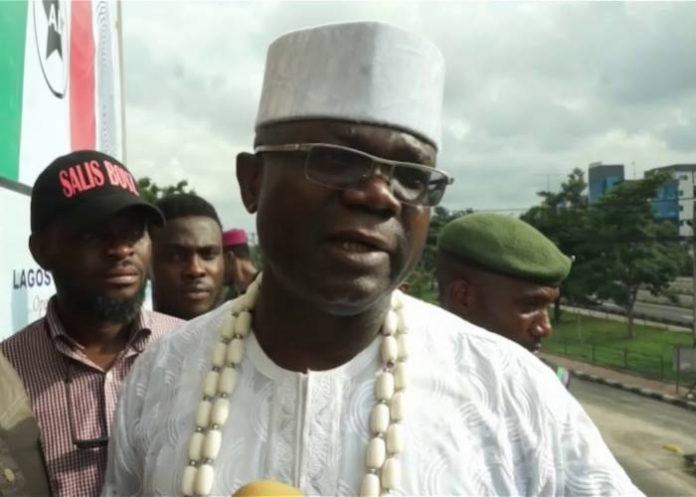 After failing at the Tribunal and the Court of Appeal, the Alliance for Democracy, AD, governorship candidate in the March 9, 2019 election in Lagos State, Chief Owolabi Salis, has gone to the Supreme Court to request for the cancellation of the victory of Governor Babajide Sanwo-Olu of the All Progressives Congress, APC.

According to him, Sanwo-Olu was not elected by valid votes and he is rejecting his victory for being a corruption of justice.

He added that the voter’s card the governor used was cloned and he discovered that when he asked for Sanwo-Olu’s forms at INEC.

His words, “We presented thousands of pages before the tribunal and the court of appeal; arguments were heard and decision was rendered in about three days. The question is has the judiciary gone through the details.

“Sanwo-Olu and APC in collusion with INEC Lagos manipulated everything in the election process. To be validly elected as the governor of a state, you have to score the majority of the valid votes in two-thirds of the local governments in the state. You also have to be qualified to contest for the election.

“The issues that were laid before the tribunal were whether Sanwo-Olu and APC scored majority of the valid votes in two-thirds of the local governments and whether he is qualified to contest. The emphasis here is on the valid votes not the allocated or written votes. The results as announced were allocated. Sanwo-Olu and APC in collusion with INEC had free ops to manipulate everything and targeting particularly Chief Owolabi Salis possibly because of the Channels debate.

“I repeat, zero was allocated for Salis and AD in Ifako Ijaiye where I hold two chieftaincy titles, the Saraki of Ojokoro and the Ajagungbade of Ifako, where I have over 5,000 trained students in empowerment…

“A vote is valid when lawful registration, lawful accreditation, and lawful voting is devoid of electoral malpractices, in other words, a vote is not valid when is as a result of intimidation, thuggery, vote buying, multiple voting.

“The contention of the petitioner Salis and AD is that there is substantial non compliance with the electoral act and guidelines, that the votes recorded for Sanwo-Olu and APC were allocated votes and not valid votes and that electoral malpractices were committed in favour of the Sanwo-Olu and APC in 5 stages of the elections as follows:

“Stage 2: Election day malpractices done at polling booths. This includes non use of card readers, chasing away agents of the opposition, Voters intimidation, multiple voting, vote buying, food for votes and kitchen were maintained in many polling booths; You vote, you get a pack of food, thuggery, violence including use of dangerous weapons as widely reported by registered observers, bribery and overspending

“Stage 3: Ward Level Malpractices. This includes chasing away agents of the opposition parties, collation malpractices, excessive delays to favour Sanwo-Olu and APC among others.

“Stage 4: Local Government Level Malpractices This includes chasing away agents of the opposition parties, excessive delays to favour the opposition party, collation malpractices among others. All the results at the Local Governments levels were mere allocations and not a reflection of the valid votes. “Stage 5: State Level. This includes collation Malpractices adoption and collusion. This is the final.

“Interestingly, Sanwo-Olu and APC did not testify in the tribunal to the allegations that Chief Salis won more of the valid votes and should be declared as the winner and that Sanwo-Olu was not qualified for the election. Sanwo-Olu was subpoenaed by Salis lawyers but refused to appear as a respondent.

He was supposed to testify but did not testify. If you are a respondent is a case and you failed to testify, then you have conceded in the allegation.

In other words, Sanwo-Olu conceded Salis won the majority of the valid votes in the governorship election.”