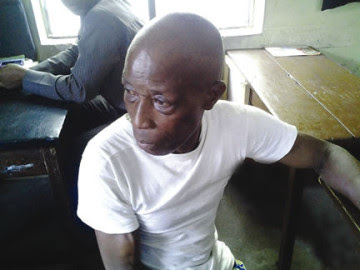 According to the police, the suspect, who works at a cemetery in Epe area of the state, sold human parts for a living, adding that he had become notorious in the area for selling human parts.

It was learnt that the suspect was arrested following a report by a resident who saw him displaying a skull for sale.

The grandfather, who could not give his exact age, said he started selling human parts because he was poor and jobless.

�I live at 2,Tungbehin Street, Epe. I have two children and I am a grandfather. I have always been poor all my life because I had no formal or informal education. I used to be a fisherman but when there were no longer fishes in rivers in my area, I became a gardener at Epe Local Government Secretariat.

�About four years ago, the LG said they no longer needed my services so I started trimming grass at a cemetery in the area.”

The suspect, who did not deny the allegations, said there was nothing wrong in selling dead people’s parts since the dead never used them.

He said one day, while he was clearing weeds in the cemetery, he noticed a human skull which had been dug up.

He said, �Most times, when a corpse is not buried with a coffin, the possibility of the corpse resurfacing is very high. So, what workers at the cemetery do is to gather some of the corpses and burn them instead of burying them again.

�I realised that this was not a smart thing to do since it would be better to make money from it. The families of these dead people never care about them once they are buried and weeds had taken over the cemetery.”

The suspect said he sold only two corpses while he had on numerous occasions given them out for free.

He said, �I have sold only two human heads. I sold the first one for N1, 000 while I sold the second one for N1, 500. Last week, a resident approached me saying an herbalist needed the head so I got a decomposed head, for him, washed it and put it on a fence to dry.

�A resident saw me and raised the alarm and that was how I was arrested.”

PUNCH Metro had reported last week that five people, including an herbalist, were arrested for selling human parts.

A police source told one of our correspondents that the trend was common in areas where public cemeteries were situated.

�Areas which are not located in the metropolis and have cemeteries have become the hideout for cartels which specialise in sale of human parts. We (police) have reason to believe that some of these human parts dealers also engage in ritual killing,” he said.

The source added that efforts were going on to arrest other human parts sellers in the area.

When contacted on the telephone, the spokesperson for the state police command, Ngozi Braide, confirmed Kayode’s arrest. She said he had been transferred to State Criminal Investigation Department, Yaba.

I Need A Man To Show My Cleavages To – Toke Makinwa