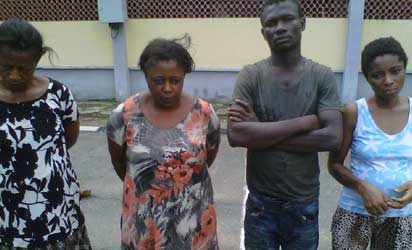 Policemen attached to Ilemba Hausa division in Lagos State have arrested a couple and two others who allegedly specialized in abducting children between ages one and four years and selling them to barren women and motherless homes in the eastern part of the country. So far, about seven children reportedly stolen from their parents’ homes in Lagos and other parts of the country have been recovered from their new homes in Imo, Anambra and Delta states.

One of the stolen children,� Ezeaka Uchenna� (4) was picked from his parents’ home, Madu Street, Jakande Ojo, Ajagbadi area of Lagos by one of the suspects, Adaeze Mba, on March 18, 2013.
Adaeze, who packed into same compound with the Ezeakas in January 2013, was said to have gone to purchase tapioca from Uchenna’s mother that fateful day, only to abscond with the child. The couple immediately moved out of the area and allegedly sold the child to a couple in Obosi, Anambra State for N600,000.

However, during investigation, spokesman for the Lagos State Police Command, Ngozi Braide, while parading the suspects, at the Command’s headquarters, Ikeja, said the policemen acting on a tip-off stormed Ikot Ekpene in Akwa Ibom State where the couple were arrested.

�They confessed to have sold the child to one Mrs Benedict at Asaba, Delta State. We proceeded to Asaba where Mrs Benedict was arrested. She made a confessional statement that she buys and sells children to barren women and that she had sold Uchenna to one Mrs Patricia at Obosi in Anambra State.
�Investigation revealed that the couple had earlier stolen Goodluck Amaechi (3) and Promise Amaechi of same parents in Imo State and sold to Mrs Benedict. Mrs Bendict confirmed their statements and we proceeded to Obosi where the children were recovered from one Church of Goodness Motherless Babies Home.”

Pregnant Adaeze who hails from Mbatolu Local Government Area of Imo State blamed her indulgence on the devil and her husband, disclosing that they have been in the illicit act for five years.
�Please forgive me. My husband talked me into it. He asked me to get a child for him that he would pay me N400,000. When I asked what he wanted to do with the children, he assured me it was not for ritual purpose that his boss, Mrs Benedict takes them to motherless babies home.

�Our targets are usually couples with more than three children. What we do is to move into an area, stay for about two to three months to get quainted with the people and immediately we got any child, we would leave the vicinity for another area where we are not known. We usually rent� single room apartments without furnishing them.”

Corroborating her claim, her husband, Mba, said he ventured into the act when his sand dredging business was no longer lucrative.

He said: �When I complained to a friend, he introduced me to Mrs Benedict and since I met her, my life never remained the same.”

He said a male child was more expensive than female, disclosing that Madam Benedict paid him her as much as N600,000 for a male child and four N400,000 for female. But for each child brought by his wife, he said he used to make N200,000 gain.

�What we do is immediately we succeed in stealing a child, we send him/her to my boss who in turn sell to motherless babies home and to barren women. I was responsible for my landlord’s missing children. I sold them for N400,000 each in Mbatolu, Imo State.”

How we arrested Benedict �Police

Vanguard gathered that Mrs Benedict was arrested after the policemen who posed as pregnant women called her on phone to inform her that they had a baby boy for sale. But on arriving the designated point in Asaba, Delta State, the suspect who sensed trouble was said to have zoomed off with one of the police women in her car, in a bid to escape but was overpowered.

The suspects, according to Braide, would be charged to court soon.

On her part, the woman whom the couple sold 4-year-old Uchenna to begged the world to forgive her that she opted to buy the child following her inability to give birth to a child of her own.

� I was married for 21 years without a child to call mine. Someone introduced me to Benedicta and when I told her I needed a child, she requested for N600,000 but I told her I could not afford that amount. She later called me to meet her at the River Niger bridge at Onitcha. On getting there he handed over the child to me. I told her he was too big but she said that was the only one she had.

I changed Uchenna’s name to Amarachi and enrolled him in a school where I pay N50,000 per term”, said the widow who simply gave her name as Patricia.

On her part, 35 year-old Benedicta Ogbonna, who is a mother of four said she was only involved in the act to help barren women. Asked why she did not offer her own children for sale, she kept mute.