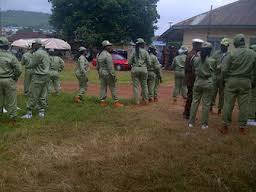 A Lagos High Court in Ikeja on Tuesday sentenced a member of the National Youths Service Corps (NYSC), Ibok Benneth, to eight months imprisonment for attempting to commit internet fraud.

Benneth, 30, was convicted by Justice Olabisi Akinlade after he pleaded guilty to the offence on arraignment.
The News Agency of Nigeria (NAN) reports that the convict is currently undertaking his one-year mandatory service at Afikpo Local Government Council in Ebonyi State.
He had entered into a plea bargain agreement with the Economic and Financial Crimes Commission (EFCC) on the advice of his counsel, Mrs. I. Njoku.
In her judgment, Akinlade said the sentence would commence from August 28 when he was arrested by the police.
The judge said Benneth had no justification for engaging in internet fraud, stressing that he should have thought of the consequences of his actions.
She said: �At the age of 30, some of your age mates are married and already managers with serious responsibilities in some big companies, while you are still serving.
�Now you have been convicted, which will be reflected in your record. You should have thought of the consequences before engaging in fraudulent activities.
�You better go and change because if you go back to fraud, the EFCC will catch you again and the law will catch up with you.
NAN reports that Benneth was arraigned by the EFCC on 10 counts bordering on forgery and possession of fraudulent document. The EFCC counsel, Mrs. Atinuke Daramola said the commission had on July 2 received a petition from one Mr. Sam
Ohuabunwa claiming that some unknown persons had hacked his e-mail account.
Daramola said: �The petitioner said the persons started requesting his mail contacts to send money into a certain Zenith Bank account no: 2080306452, on his behalf�.
The counsel said that investigations by EFCC operatives at the bank revealed that the account was owned by Benneth,
She said: �This led to his arrest at his residence located at Plot 2, Pilot Crescent off Bode Thomas, Surulere, Lagos.
�A search was conducted in his apartment and several forged documents relating to Union Bank Plc and National Drug Law
Enforcement Agency (NDLEA) were found in his possession.
�Other correspondence via e-mail to some foreigners, where he claimed to have won a fictitious European Winning Lottery Programme, were also found in his laptop�.
Daramola said he had admitted to the EFCC operatives in a statement that he owned the Zenith Bank account and was also involved in other fraudulent activities on the internet.
She said his offences contravened Sections 6, 8 (b) and 1(3) of the Advance Fee Fraud and Other Fraud Related Offences Act, Laws of the Federation of Nigeria.