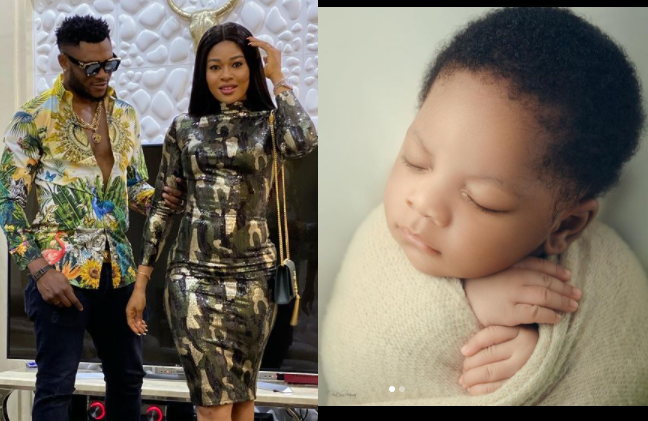 Nigerian footballer, Aaron Samuel has welcomed a son with his wife, Chinwe.

The 26-year-old who plays as a striker for China League club Changchun Yatai recently jumped on Instagram to announce the birth of his son who they have named Brian.

Flaunting amazing photos of his bundle of joy, he wrote, “Here comes Brian my prince.” Aaron Samuel Olanare (born 4 June 1994) is a Nigerian professional footballer who plays as a striker for China League One club Changchun Yatai.

In October 2014, Olanare received his first call up for Nigeria national football team by Stephen Keshi to play against Sudan in the 2015 Africa Cup of Nations qualification. On 11 October 2014, he made his debut for the Super Eagles in a 1–0 away defeat against Sudan, coming on as a substitute for Nosa Igiebor in the 47th minute. On 15 October 2014, Olanare scored his first goal in a 3–1 home victory against Sudan. He restored Nigerias lead in the 66th minute when he stabbed home a loose ball after a mix-up between Sudan goalkeeper Akram El Hadi and his defender.

Olanare scored his second goal for Nigeria in a 2–0 away victory over Congo. He scored the second goal of the match to secure the victory.