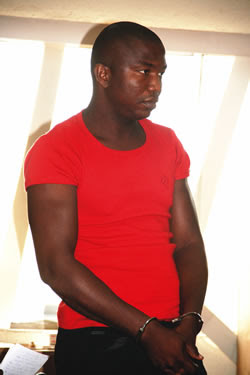 The National Agency for Food and Drug Administration and Control has arrested a trader, Olisaemeka Osefoh, for importation of counterfeit medicines into Nigeria.

The suspect was also arrested with fake Rough Rider condoms. PUNCH Metro learnt that the estimated street value of the goods was N106, 210, 000.

Some of the drugs seized include, Mycoten cream, Neurogesic ointment and Skineal cream.
In his statement, the suspect said he was in partnership with a cartel based in China, where the products were sourced, before being shipped to Nigeria.

The Director General of the agency, Dr. Paul Orhii, while parading the suspect, said Osefoh was arrested after a tip off.
He said the suspect had also given investigators information on how the goods were illegally cleared through Tincan Island Port, Lagos.

He said, �Operatives of NAFDAC’s Investigation and Enforcement Directorate raided a warehouse located at Progressive Traders Market known for the sales of jewellery and cosmetic products.

Orhii said investigations revealed that drug counterfeiters no longer specialised only in foreign products but also in Nigerian-made drugs.
He said most of the fake drugs being imported were from China while India was second. He however said the agency was having talks with the Chinese Embassy on the issue.

He said, �I can say for sure that most of the fake drugs we have in the country now are from China while India comes second. The Indian government is giving us full cooperation but we are still having talks with China.

�NAFDAC is working with the Chinese Embassy in Nigeria to track down the criminal company in China that connived with the suspect to ship the fake medicine into the country.”

The NAFDAC boss seized the opportunity to warn landlords who rent out their warehouses to dealers in fake drugs.
He said henceforth, landlords would be arrested and charged to court if their properties were used for such illegal acts.

He advised consumers not to patronise traders who sold drugs secretly in their shops but should use proper pharmacies instead.
�Recent discovery has revealed that drug counterfeiters now operate from markets that deal in other commodities so as not to draw the attention of law enforcement agencies to their nefarious activities,” he said.